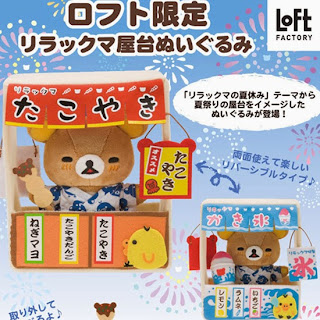 Summer is coming and a series of Rilakkuma Summer theme Plushies are rolling out.

Korilakkuma seems to be missing out from all the Summer action for now but here is the new Rilakkuma x Loft Collaboration Scene Set.

屋台 Yatai refers to small, mobile food stalls that you often see in Japan's streets and during Japan's Matsuri (festivals). Here we have Rilakkuma selling both hot and cold food.

Kiiroitori is the customer for both food stalls which made it extra cute! 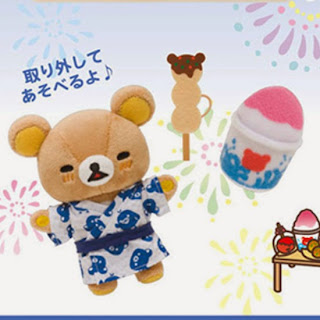 Rilakkuma can be removed from the scene set and he is wearing some super cute yukata! Rilakkuma and Kiiroitori silhouettes are printed on the yukata. The Takoyaki and Kakigori can be removed and placed on his paws accordingly.

If you have previously purchase the Fukuoka anniversary series, You can add them to this scene set and recreate the Matsuri scene in Japan! And if you are interested in getting the Fukuoka series to add into your collection, click on the links below to check them out

Hearts from Rilakkuma Shop at 4:31 PM